The KFF started its funding support in Spring 2014. Alongside some of the established charity partnerships we continue to nurture, here is an archive of isolated projects we funded from 2014 to 2015.

If you are interested in any of the below causes, please click on the link to their charity page (where relevant) or contact us for more information.

In 2015, the KFF pledged a donation towards the ‘Street Child Ambassadors’ project with the Street Child World Cup charity, in conjunction with the Studio Cambridge English Language programme.

Established in Cambridge, the charity in association with Save the Children successfully organised two successful World Cup tournaments for street children. Kate Farrer supported the charity herself, and was very close to its founders.

In June 2015, 8 children arrived in the UK. Supported by bursaries and a travel grant from the KFF, they stayed with host families in Cambridge and over 10 weeks, took part in a unique programme of events to help the former street children improve their English and continue in their personal development as ambassadors for street children’s rights. The experience concluded with the Street Child United Summit in London. Read updates on the children’s journey to England on the Street Child website.

These former street children are survivors of the streets and now with support are integrating back into society. The Street Child charity believes that a young person who can speak from experience about life on the streets makes a very powerful spokesperson, and the KFF was very proud to be supporting this particular project. Read more about the charity’s wider work here.

March 2015: After making contact with HART – the Humanitarian Aid Relief Trust – the KFF were impressed and humbled by the work the charity does for displaced children and families in Uganda. Focusing on the extreme challenges faced by communities following the 1987-2006 brutal activities of the ‘Lord’s Resistance Army’, there are now over 25,000 displaced and uneducated children: read the most recent edition of HART’s newsletter for detail on this frightening reality.

At our first meeting of 2015, the KFF pledged £4,000 to help HART’s local partners in Uganda built an Early Child Development block, christened the ‘Paorinher Centre’. Building is underway, and we have provided the final £4,000 to complete the project. We were sent a mid-way report detailing some amazing statistics that HART intends the block be used for. Vincent, the local manager at the Center, explained to us that 140 pre-school children in the local community will use the Paorinher Centre every year for 20 years to increase their early child development, adding up to 2,800 kids overall.

June 2015: We received a celebratory email from our Ugandan contact Vincent, confirming that the Paorinher Centre was completed. Vincent sends us ‘greetings and love’ from the staff and children, and thanks us for the ‘great contribution’ we have made. As evident from the photo below, we hope our grant ensured multiple grinning faces! 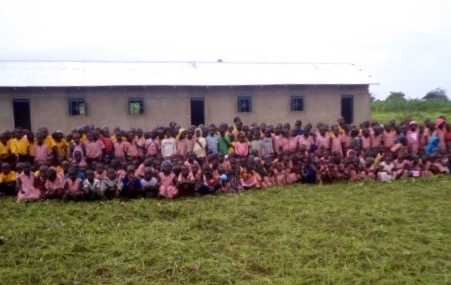 June 2015: Just some of the children who will benefit from the Paorinder Centre, just completed

You can visit HART’s website for more information of their relief aid activities across Africa and Asia.

January 2015: The KFF looked to secure a funding agreement with PACE, Parents Against Child Sexual Exploitation, a charity helping UK children and their families who have suffered from sexual abuse. One of the founders of the charity was Kate’s close friend, giving the cause central relevance to the KFF’s aims. The charity is establishing its resources and aims: for now, you can read more about the new organisation’s initiatives here.

2014: The Forget-Me-Not Chorus, the Tapestry Programme

December 2014: The KFF has agreed to send £3700 towards the cost of Forget-Me-Not’s next Spring initiative, the Tapestry project. This is a programme encouraging the members of the Forget-Me-Not choir to tell their stories, about childhood, family life and coping with dementia. The charity has engaged writer Lou Osborne, alongside regular musicians, to manage this project, and will update the KFF with their progress.